Officers from the Mineral Resources Development Company (MRDC) and the Department of Petroleum and Energy were received with song and dance over the weekend in Kiunga as the team visited the Western Province fraction of the PNGLNG pipeline Segment 1 beneficiaries. 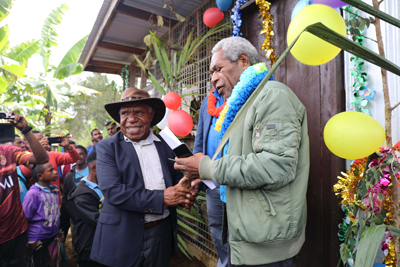 The visit was to finalise remaining paperwork and to announce to them that their benefits from the project would be reaching their bank accounts this week.

Segment 1, has 13 beneficiary clans, 4 from the Western Province side and 9 from Hela province. They will be receiving 1.78 percent of K21.9 million which is earmarked as cash benefits for the entire PNGLNG pipeline landowners from segment 1-8.

The Nomad Local Level Government President, Daba Sodu, representing the Western Province landowners said the people of Juha Segment 1 were joyous because this would be the first time they will be receiving benefits from the resource project after many years of waiting.

He said many older people had worked hard and long since the initial talks of benefiting from the project and have died without seeing the fruits or their hard work. “Our children will now benefit, and we are thankful you are here with us to share this wonderful news” said Sodu.

The team met with Government Representatives from the Western Provincial Administration to brief them of the payment exercise and other project benefits for the province and its people.

Deputy Provincial Administrator Rupert Tabua, thanked the Managing Director of MRDC, Augustine Mano for making it possible for his people to finally see this day.

“This is the first of its kind, it’s a special day for the people and for us, and we convey our sincerest thanks to the Managing Director and also to the DPE Secretary”.

The team will continue onto Hela province to meet with the nine clans there in the coming days.